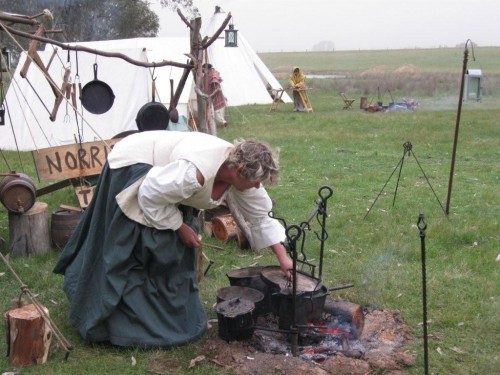 Robyn readies to stir the pot as a storm gathers on the horizon. Photo by Kevin

Another warm welcome to Around the Traps! And can you sense the wonderful aroma of camp fire cooking wafting from the Dutch ovens in our cover picture? It makes my mouth water whenever I recall those wonderful tasty and nutritional marrow-bone soups and stews prepared in outdoor traditions, where the anticipation and fresh air adds keenness to one’s appetite while thoughts get lost in the depths of glowing coals.

Snippets from an article by Sally Fallon, president of the Weston A. Price Foundation – for wise traditions in food, farming and the healing arts.

Traditional peoples who consumed large animals did not ignore the marrow hidden away in the bones; in fact, they valued the marrow as an extremely nutritious food. Weston Price provides us with a good example: “For the Indians living inside the Rocky Mountain Range in the far North of Canada, the successful nutrition for nine months of the year was largely limited to wild game, chiefly moose and caribou. During the summer months the Indians were able to use growing plants. During the winter some use was made of bark and buds of trees.

I found the Indians putting great emphasis upon the eating of the organs of the animals, including the wall of parts of the digestive tract. Much of the muscle meat of the animals was fed to the dogs. It is important that skeletons are rarely found where large game animals have been slaughtered by the Indians of the North.

The skeletal remains are found as piles of finely broken bone chips or splinters that have been cracked up to obtain as much as possible of the marrow and nutritive qualities of the bones.

These Indians obtain their fat-soluble vitamins and also most of their minerals from the organs of the animals. An important part of the nutrition of the children consisted in various preparations of bone marrow, both as a substitute for milk and as a special dietary ration”

Cultures such as the Native American or Mongolian might have eaten the marrow raw — which can be extracted in one long, cohesive cylindrical piece with a well-placed tap on a femur bone.

Very little information is available about the nutritive qualities of bone marrow. Some commentators insist that bone marrow provided a rich source of polyunsaturated fatty acids in traditional diets. Bone marrow is likely rich in vitamin K and other fat-soluble nutrients, but tests to determine a range of nutrients in bone marrow remain to be carried out.

One writer describes two types of marrow, one type from the lower leg which is soft “more like a particularly delicious cream in flavour” and another from the humerus and femur that is “hard and tallowy at room temperatures”.

Modern westerners are not used to eating bone marrow, and its dark colour can be unappetizing to view. A solution is to simply spread marrow on toast and cover it up. If you are making beef broth using marrow bones, or beef shank stew or osso buco (Italian-style veal shanks), remove the marrow from the bones when the broth or stew is ready and spread on toasted sourdough bread — it spreads like butter; then sprinkle generously with salt and cover with finely sliced onions and capers — you’ll be eating something very delicious while feasting your eyes on white (or red) onions and green capers.

This can be served as an hors d’oeuvre before the main course. (Note: to prepare capers, rinse off all vinegar and then thoroughly pat dry.) Another wonderful garnish is chopped parsley mixed with capers, thinly sliced onion, olive oil and lemon juice.

Many chefs recommend soaking the marrow bones (cut 2-3 inches in length) in cold water, changed several times, for 12-24 hours. This process makes the marrow turn a pale creamy pink colour instead of the unappetizing grey. After the soaking, cover the bones with cold water, bring slowly to a boil and barely simmer for about 20 minutes. Scoop the cylinder of marrow out with the handle of a small spoon. You can then slice the marrow and use it as a garnish on meat, or add it to blended soups.

The Rocky Mountains are the marrow of the world. Del Gue (Stefan Gierasch) from the 1972 Sydney Pollack film Jeremiah Johnson starring Robert Redford.

We had a suggestion to feature members’ “Favourite Fotos” in The Traps, but haven’t seen any entries for a little while. No matter, we’ll just have to feature the editor’s favs of casual moments about camp. Check out the bewdy of Colin No-Mocs in this issue. Do you have a photograph that you’d like to share with fellow members? 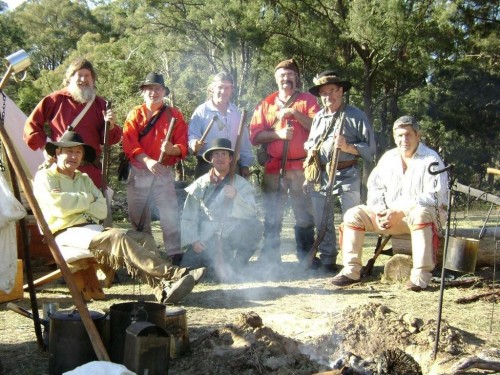 May Turkey Shoot at Bernard’s Cache

Jim arrived early Friday 1st May and had the coffee pot bubbling along while the weather forecast suggested a little rain. Ian and Murray followed soon after and set up camp so quickly they were rewarded with the task of latrine building. By evening seven pilgrims were enjoying the central fire but with a watchful weather eye. Bob, Chook, Ian, Jim, John, Murray and Paul were enjoying an early start to the weekend. Glen trekked in for the day only on Saturday, while Justin had escaped from a town late Saturday arvo with a new mule packing his trusty Harpers Ferry and Voyager tent for a single overnight bivouac.

That forecast of a little rain was quite correct – we had a little rain to start the weekend, very little; not even enough to adjourn to canvas shelter. The farmers want a lot of rain! Actually Saturday, Sunday and Monday were all beautiful warm autumn days, but with rug-up fire-warming clear starry nights. Saturday’s main event was the simulated Turkey Hunt with some very wary turkeys requiring the most practised calling to coax them out of the covering timber.

With Ian pulling all the strings Paul had expert vocal calling technique while Glen tried a magic store-bought caller. Everyone participated with vocals and after lots of weird-sounding gobbles, some pan flashes and a few wobbles, Chook was deemed winner on the day, luckily, as he had forgotten to bring the turkey plate prize. Glen and Paul had now run out of time and had to leave camp Saturday evening.

Sunday had the group in serious load development testing. Justin, looking for all-the-world like Del Gue’s handsome twin, found the mark with his 1803 Harpers Ferry flinter. Using reduced loads he plastered a cluster of holes in a plywood porker. Murray did his best to behead the old Beaver Creek gobbler while others picked on dried bones and a sow porker. Bob and John had to depart the scene on Sunday for work commitments on Monday, but Ian received good sign up on Mating Rock to stay on a bit longer.

So Ian, Jim, Murray and Chook all enjoyed one more evening camp-fire before breaking camp in the late morning. Everyone agreed it had been a superb weekend cut too short by other commitments. But our Winter Quarters camp is only a few weeks away so planning can extend the fun till then. We hope you can rendezvous with us.

Plan now – Our 5th Annual Winter Quarters Rendezvous 6, 7 & 8th June Queen’s Birthday holiday weekend at Bernard’s Cache, Highlands-Caveat.
Camping on the plateau overlooking the magical Painted Pony Plains, challenging the winter chills and beating them off with roaring campfires, smoking flintlocks and apple pie. Winter Quarters can be as comfortable as any season. Prove it to yourself!

Sept 19th/20th thru to 26/27th Primitive Rendezvous at Beaver Creek, Whorouly. Come for the two weekends or camp right through for 9 days of spring rendezvous fun. Mark your calendars now and watch for further information in our next edition.

November 28th & 29th a Time Line Camp, at Campbelltown, Tasmania. Do we have any pilgrims keen for this event? Please advise the secretary if you might be a starter! 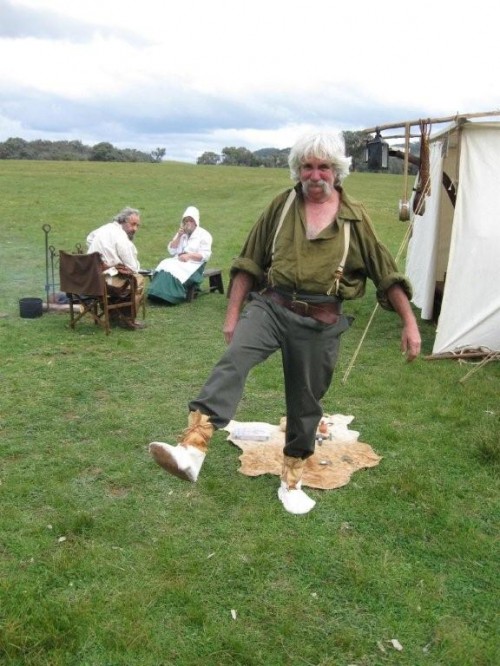 Following our Vol 15 report of receiving invite to submit an application to join with the other black powder clubs of Victoria in this administrative body, that application was made and accepted, giving us access to Government and politicians via the Shooting Sports Council of Victoria. We will provide two delegates to attend meetings and our Committee has already introduced suggestions to invigorate this management level of our sport.

Needing to use a mobile phone to advise loved ones at home that an extra day was absolutely necessary, Ian needed to locate an area of signal reception. Jim scouted ahead and guided Ian to a spot, recounting past connection opportunities at a place now known as Mating Rock. (Rules 3 and 6 were quoted repeatedly about the camp)

‘Tis rumoured that a certain flint and round ball enthusiast was so impressed upon learning the daily Minie-ball production capacity at Woolwich Arsenal that he saluted Mr Parker in a recent western chronicle. Hale Parker!

Annual subscriptions were due on 31st March. Just a few still outstanding! Please forward your cheque or money order to Murray as soon as you possibly can. Paid up members will receive a new membership card with the expiry date 31/3/2010. 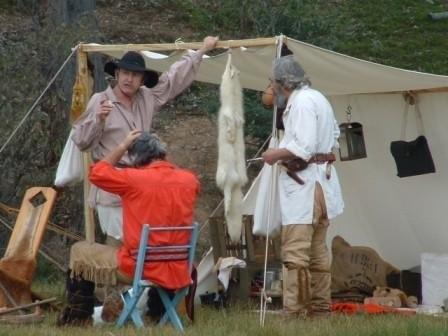 I told my Pap and Mam I was coming to the Western Districts “Wet to the Arse” shoot on 15th & 16th August. They says: “Son – That creek is for animals an savages and likely to chill your bones to the very marrow, and there ain’t no asylums for the crazy ones! See that you pack along plenty of shrub.”

Our website http://freetrappers.org.au continues to serve our members, as well as to showcase us to the world. The site generates an automatic monthly report telling us how many visits have been made for the month and from which countries, plus other data gathering.

As one would expect, the majority of visits to our website are home grown Aussie hits, followed then by the U.S.A., the U.K., and Canada. We welcome all these pilgrims, the universal Longhunter and Mountain Men enthusiasts who have come far to chew the fat and digest the marrow of the world.

The Club wishes to acknowledge donations from several readers who have enjoyed complimentary editions of Around the Traps. Your support is truly appreciated.

Rendezvous with us – bookmark Around the Traps http://freetrappers.org.au/newsletters/