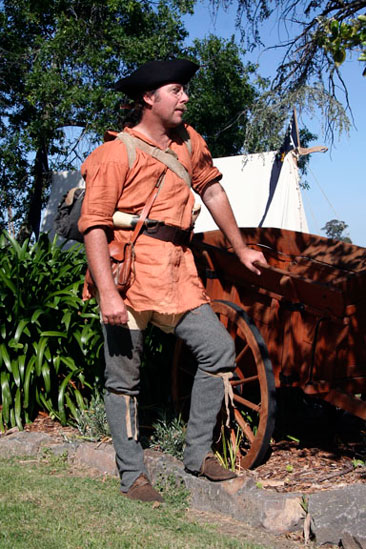 In this first edition of Around the Traps for the New Year we feature Paul Sly, alias Le Reynard, dressed as an Eastern Longhunter of around 1760. Paul represented SCFT at the annual Melbourne Medieval Fayre and Tourney held in November. This is a universal living history display from the Ancients to Australian Colonial eras.

Here, Paul scans the horizon for a distant landmark and he is obviously prepared for a longish trek. He is wearing a black felted tricorn, common among Eastern gentlemen adventurer folk of the era. Paul has his hair tied back in a queue with a leather thong. His loose hunting shirt is of vegetable died linen, hand sewn in simple pullover style.
Paul is wearing stout linen breeches, with grey wool leggings drawn just below the knee with garters of brain tanned leather. His woodland style centre-seam moccasins of deerskin receive regular proofing with copious applications of a lard mixture.

In the picture below, we see Paul’s method of carry for his bedroll. This consists of a home made oil cloth tarp encasing a single wool blanket. Wrapped within the blanket Paul stores a spare shirt, stockings and dry mocs, plus a small sack of dried beans. The whole rests comfortably in the small of the back while above this Paul carries his Possibles knapsack. Made from vegetable tanned calf hide it holds a small kettle (billy) a tin cup, fire lighting kit, compass, plus clay pipe and tobacco and small personals. This is positioned high on the shoulders to lessen fatigue during a long hunt. 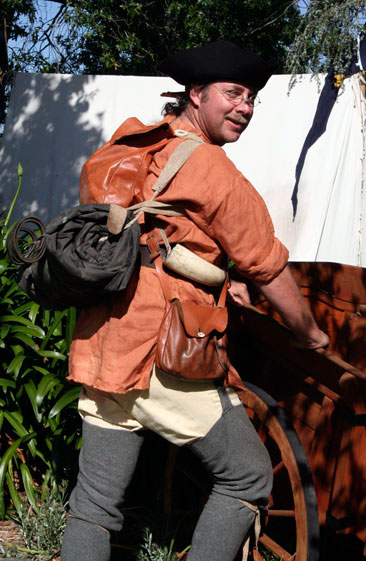 back packed – photo by Val Rees

With sleeves rolled for warm weather Paul wears his hunting pouch lower than usual, however the horn remains high to tuck safely under the elbow facilitating rapid movements should such be necessary. Paul made his hunting pouch from the same calf skin as his Possibles bag. For eyewear, Paul’s prescription lenses are fitted to correct period style frames to compliment the overall portrayal of his chosen persona.

Our thanks to Paul for the leading article contribution, and we are also indebted to photographer Val Rees, who supports the annual MMFAT events at Berwick.

Ian Convey shares this general description of some 30 trappers as documented in the writings “Journal of a Trapper or Nine Years in the Rockies Mountains 1834-1843” by Osborne Russell, first published in book form 1914. (We reproduce spelling and minimal punctuation as per the original publication to preserve authenticity of style.)

21st April 1838
“Early next morning about 30 of us were armed equipped and mounted as circumstances required. A Trappers equipments in such cases is generally one Animal upon which is placed one or two Epishemores a riding saddle and bridle a sack containing six Beaver traps a blanket with an extra pair of Mocasins his powder horn and bullet pouch with a belt to which is attached a butcher Knife a small wooden box containing bait for Beaver a Tobacco sack with a pipe and implements for making fire with sometimes a hatchet fastened to the Pommel of his saddle his personal dress is a flannel or cotton shirt (if he is fortunate enough to obtain one, if not Antelope skin answers the purpose of over and under shirt) a pair of leather breeches with Blanket or smoked Buffaloe skin, leggings, a coat made of Blanket or Buffaloe robe a hat or Cap of wool, Buffaloe or Otter skin his hose are pieces of Blanket lapped round his feet which are covered with a pair of moccasins made of Dressed Deer Elk or Buffaloe skins with his long hair falling loosely over his shoulders complets his uniform. He then mounts and places his rifle before him on his saddle. Such was the dress equipage of the party myself included.

“…Just the same I am kind of lonesome for the little old pond, for all I was in such a hurry to get away from it.” -Grey Owl to Riding Mountain Superintendent 1932 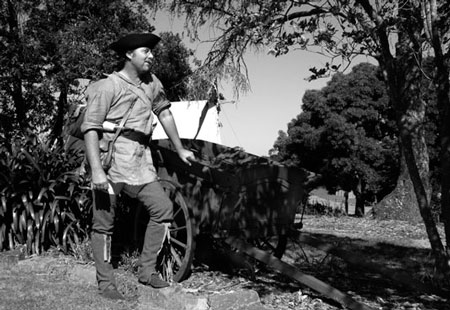 It’s nearly 1853 and most of the die hard Trappers have taken what little they could get for their last meagre catch of plews, and also sold their traps for a pittance. They’ve left the shining mountains for the coast, and are now seeking work-passage on any sailing ships bound for Australia. They have gold fever. They have it bad! Will the smell of tar and wet sailcloth prepare them for the dry waterless gullies of Victoria’s gold fields? Better get one of them new fangled Colts – for protection – or as mayhap, for some other devious work.

Still proclaiming the enjoyment of developing a persona – Have you found yourself?

Your clue to apparel whilst in search of Victoria’s gold.
In John Sherer’s book The Gold-finder of Australia, there is a brief description of the clothes he and his two mates wore or carried when they set out from Melbourne for the Forest Creek diggings near Castlemaine, in the late summer of 1851.

“We kept the bedding brought from England and used on board ship, also our sea-boots. We had a couple of blue flannel shirts apiece, half a dozen pairs of worsted half-hose, a pair of fustian trousers, two pair of canvass trousers, and a jacket and waistcoat of beaverteen. I also had a pilot coat and wore a black sombrero, or sometimes a Scotch cap.”

Peter L. Cox writing in 1998 for The Genealogist in an article entitled The Fabric of the Nineteenth Century and searching a contemporary encyclopaedia for those fabrics mentioned above by John Sherer provided the following descriptions : –

Beaverteen: a cotton twilled cloth in which the warp is drawn into loops to form a pile but not cut as with velvet. It is then dyed and shorn.
Canvass: a coarse, unbleached linen.
Flannel: a soft, open woollen cloth. Can be twilled, or plain and undressed, milled, coloured or checked.
Fustian: a coarse, twilled cloth made from cotton or a mixture of linen and cotton, with a shorter pile than velvet
Pilot Cloth: a heavy, indigo blue woollen cloth. Used for overcoats and seamen’s wear.
Worsted: a cloth made from worsted yarn.

Mr Cox lists many other descriptions for nineteenth century fabrics, the half dozen above are offered merely to assist our vision of the John Sherer trio travelling to the Victorian gold fields in 1851. 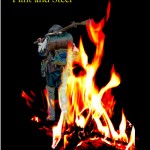 Did any readers follow up on our story about Grey Owl? I had meant to visit my local library to check out some of the book titles we listed, alas, it just didn’t happen. But in my Xmas stocking, to my great delight and appreciation, a DVD copy of the modern film “Grey Owl” starring Pierce Brosnan as Archie Grey Owl. It features magnificent Canadian scenery, camps, cabins and lodges, trapping, romance, and affinity with the beaver. Oh, and I really must tell you, that baby beavers (kits) are just so-ooo-so cute. Your local video hire should have it for weekly rent. You’ll watch it more than once.

An afterthought, – it is a pity we don’t have these critters here in Australia. If their dental gear could handle our hardwoods – I reckon they could build worthwhile dams a damn sight faster than our less worthy pipeline posturing politicians.

We have a Winner! Whoohoo! Perhaps you weren’t reading sign, the fine print, or maybe you can’t read at all. So, why are you staring at this page? Well, anyway, we did announce an easy competition where you only had to make up a suitable caption for the covered wagon shots featured in our Vol 6 newsletter. Now, entries had been very slow (read non-existent) until in my Christmas mail our President offered these: 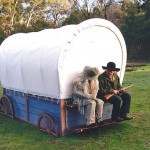 Photo #1. “Got us bogged; lost the horses? Like Hell, I was guardin’ the stock.” 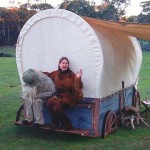 Photo #2. I know, the old “Lost the horses, have to stay the night” routine.

Dig out your Vol 6 August ’07 Around the Traps and see if you think Ian got it right!

Being the only entry arriving by the unannounced cut-off date of about 31/12/07, I declare Ian Convey is our winner. Yea! Unfortunately, Ian, being President, is ineligible to receive bootleg whisky, graft or remunerations (backyard cricket rules!). We will share his forfeited bottle around to all at the campfire next Winter Rondyvoo.

Ian was also kind enough to forward a poem entitled “Christmas Shoot 1990” written by the other Convey brother – Peter. But too late for Christmas ’07 newsletter! We may reserve it for next Xmas festive reading, or, perhaps Peter will saddle his mule in 2008 to join us at Rondyvoo, and recite the tale in person? That would be even nicer!

Beaverteen (2) deservedly tanned hide of moody, rude, rebellious, adolescent beaver?
Denim: A hard wearing cotton cloth originating from Nimes in southern France. Known firstly as “serge de Nimes”, this was shortened to “de Nimes” then denim. We find no reference to this material in Longhunter / Mountain Man era apparel. Avoid it!
Mull: (1) a thin cotton cloth, type of muslin. (2) Type of weed, can be used to make cloth, and may also be smoked. “Tastes like buffalo shit!” Avoidance recommended!

I failed to notify you all earlier that our spring raffle netted $90 to Club funds. Thanks to all supporting our fund raiser, and thanks again to ticket sellers Louise and Myrtle.

New listing…Tentative Event! April 25th – 27th long weekend? New listing! Several members have expressed interest in returning to our traditional style primitive rendezvous prior to Queen’s Birthday weekend. If we get enough takers we will request another camp at the Cache. Dates selected are the Anzac Day extended w’end, but you need to let us know, early, if you want this.

March 21st – 24th – the Rush is definitely on this Easter at Holey Plains, Rosedale. This event is an aberration from our stated aims with exception that we do support similar era re-enactment groups. And that was our decision back at our AGM in September. So we are advancing the years to the early 1850’s and swapping the long hunt, and the beaver traps, in a crazed rush to Victoria Australia, with dreams of getting rich quick. Fabulously rich! By what ever means, be it by panning, digging or cradling, tricking or trading, devious swindling, thieving or murderous intent. There is not much time left for the undecided to grasp their persona by the collar and choke out all inhibitions for the lure of gold. GOLD! Beautiful, shiny, yellow, GOLD!

June – 7, 8 & 9th long weekend. A time machine magically returns us to the pre 1840 American wilderness. We return also to the sheltered picturesque magic of Bernard’s Cache on Wild Pony Plains at Caveat for our fourth Annual Winter Rendezvous.

September Sat 20th – Sun 28th Spring Rendezvous coinciding with the first week of the Victorian school holidays. We push through hostile Crow lands and over the Wind River Range to “Beaver Creek” below the mountain called Buffalo.

And looking further ahead, don’t forget June/July 2009. We plan to rendezvous at the Australian capitol – Millmerran, Queensland. That’s 10 days, plus extra for travel!