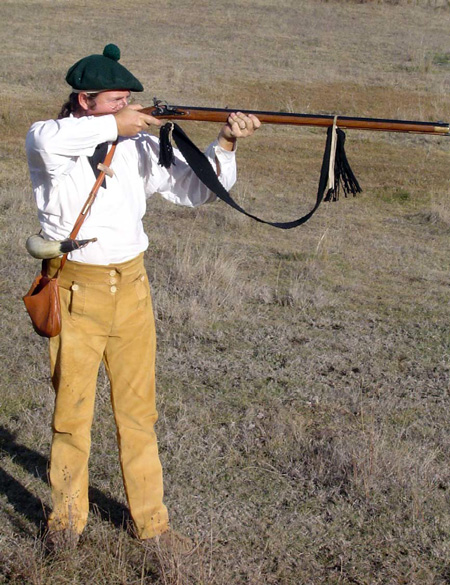 Stretching over 10 days allowed great flexibility for Trappers to attend as much as desired, and more than 40 pilgrims shared the fun times. Wow! The circle of friends in primitive style canvas is certainly growing, as evidenced in our pictures this edition.

Some could only be with us during the first weekend, and others laden down with heavy plews could not arrive until the last few days. Part of the increase in numbers over the last five days were members of the Blue & the Grey, American Civil War re-enactors who were invited to dress “up” as Buck-skinners and to enjoy our fun.

Special mention is also made of the attendance of Glenn Mitchell. Glenn, who trekked in via the South Pass, is regarded as the father of Rendezvous in the North-East. His arrival on foot in full costume was very significant, and appreciated by all present, he being most warmly welcomed back into all camps.

Nope, just kidding – Guests actually – At Beaver Creek camp, we were favoured with visits from Chips, and from Dick & Susan Schwer. Now the wily Chips coaxed his ox wagon along the Ovens River and Beaver flats, but Dick & Sue were not so fortunate. Someone had said “Ya can’t take wagons across the mountains” and Dick’s wagon indeed succumbed to the rigors of travel. Fortunately, Justin and Louise came to the rescue with their mule to fetch Dick and Susan swift as a falcon. Everyone enjoyed these visits and appreciated the opportunities of renewing old friendships.

Did I say Beaver Creek above there? Yep, you read correctly! Our hosts Rolly and Jo were rather enamoured by our re-enactment lifestyle and fun loving ways. They have decided to re-name their “Back Creek”, the winding water course where we camped, and it’s now “Beaver Creek”. Now that’s support for yer. Named especially for us! Beaver Creek, with the horn of Mt Buffalo shining in the snow clouds on the horizon.

Club President, Ian Convey, awarded the coveted Muzzleloader magazine 12 months free Subscription Certificate to Paul Sly for his flinty persistence to succeed and win our long gong target shoots. Paul eventually homed in “on target” and then continued to batter the gong a merry old tune to win the president’s admiration. Congratulations to Paul, and appreciative thanks to Scurlock Publishers for making possible the award.

Acknowledgement from Muzzleloader staff
“Congratulations to Paul Sly, and I will certainly be waiting to see the pictures. I’m glad we are able to contribute to your Rendezvous, after all…us Skinners have to stick together, however far away we may be!!” Diana – Scurlock Publishing Co., Texarkana, Texas.

When the heat and dry of summer signals us to stow away the charcoal burners for a bit, we have this golden opportunity to work on clothing or accoutrements and camp gear. It is not too soon for tentative thought toward our Autumn Rendezvous next year when Easter will be as early as March 21st – March 24th. What will be your persona?

The Blue and The Grey March West to Rendezvous

A tribute to members of the B&G who have supported us from inception. Whilst our respective eras can be as close as only twenty years apart, some significant advances had been made to firearms, weapons and travel as hunters and settlers forged across the American wilderness during that period. 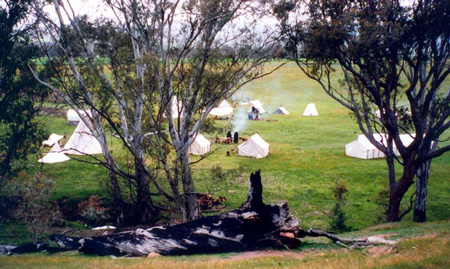 Looking down on part of the spring encampment, viewed from the slopes opposite. Sept. ’07 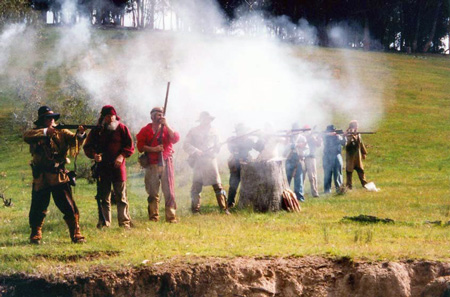 The B&G made excellent efforts at developing new persona and dressing more to Backwoods costume whilst maintaining their own excellent portrayals. At all times they blended into our scenario and showed a willing readiness to join in the fun with friendly disposition and bearing.
Saturday evening’s gathering around the roaring campfire took on an aura reminiscent of Tyler and Frapp arriving at Popo Agie. I kept looking over my shoulder expecting to see Justin in flaming capote light up the night in blazing style, but I dared not check out the bumping in back of the Bob Ellis’ covered wagon.

Also visiting us, and guest of The Blue and The Grey, was Gordon Jones, head of the Atlanta History Centre, Georgia, USA. http://www.atlantahistorycenter.org/
A hard core pilgrim / re-enactor / author who is travelling abroad gathering data for a forthcoming book on US Civil War re-enacting around the globe. Gordon showed a great interest in the how and why of ACW events here Down Under, and questioning Trappers all too anxious to tell some home grown know-how and maybe a few lies.

Gordon’s example of what “hard core” is all about was his spending the night in the open air, sleeping on the cold hard ground, with just an oil cloth to keep out a bitter wind. Given more time, I’m sure we could all learn much from Gordon, who is most welcome to return any time. He continues his pilgrimage with our very best wishes.

Out in the open field, the Blue & Grey camps withstood a heavy battering from several wind squalls, as did our presidents camp. Funny, it is coping with these little hardships that we generally remember much later among the highlights of an event. No one seemed troubled, and the tents were soon restored along with the fine weather.
The weekend had a plethora of shooting opportunities at all sorts of marks, cut-outs and gongs. For those who like to take their firelock for a walk there were rabbits just dying to hop on someone’s dinner plate. “Shoot me, shoot me! The Knife and Hawk block received only little attention but just because everyone was too busy – or was it the creek bank and deep pools behind that had the chuckers doubting their skills?

As with all our camps, there is just never enough time for sitting down on a bundle of plews around the fires, and swapping news, information, tall stories or down right lies. The days are always so relaxed but they never drag. After meals, the evenings slip away all too quickly and pleasantly, and before you know it, the time to pack up and go home arrives far too soon. Don’t you agree? 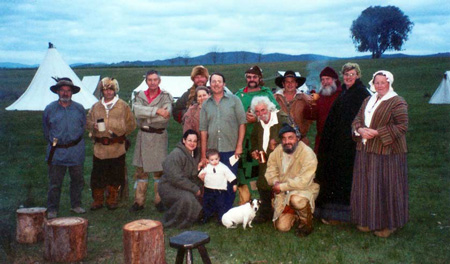 1810: Frenchman, Nicholas Appert devised a way of preserving food in sealed containers. He heated the food in glass jars and sealed the top with cork. Peter Durand developed this idea further, and, in 1811, produced the first tinned food. Baked Beans were in the wind – pull my finger!

1838: Trappers Rendezvous held on banks of Popo Agie River. Who cares whether any tinned tucker or baked beans were being traded? This is the rendezvous portrayed by Hollywood in Charlton Heston’s film – The Mountain Men. Great summer viewing!

2006: Fletcherwood Films presented a Deliverence / Rendezvous film portraying our Grey Wolf full of beans and making bacon; will we ever let him forget? …Nah! 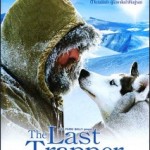 The Last Trapper – another film release in 2006 is deserving of a second viewing too!

The club has received an invitation from History Up Close and The Blue & The Grey jointly to spend Easter 2008 at Rosedale in Gippsland re-enacting Early 1850’s Victorian Gold Rush. Whilst this is outside both our era and normal activity, the club does “generally support all persons, associations or clubs with interests of a similar nature to those of this association.” The invite was fully discussed at our AGM and it was unanimously agreed that we should support this event, amending our persona, clothing and accoutrements to suit Australiana gold diggings. Making the change should not be too difficult, and it will be a terrific opportunity for us to develop our persona skills, support our friends, and to camp in totally different countryside.

March 21st – 24th Easter at Rosedale. It’s now 1850 and there are few Trappers left in the mountains, prime beaver plews are down below $3 and gold has been discovered in far away Australia. We leave the Shining Mountains to seek our fortune in gold.

Our AGM was held at September Rendezvous and minutes were forwarded to all members. The new committee elected at the AGM is as follows. 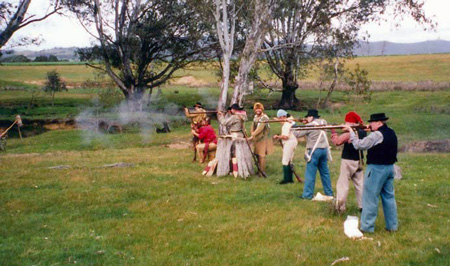 Bojo Products for all kinds of Tents and Shelters, ground sheets, tarpaulins and all canvas goods. Phone Bob Ellis 03 5796 2753 AH

Glenn and Anthea Mitchell trading as Pioneer Forge phone 03 5729 5564 for all your requirements in hand forged black iron, including fire irons and best quality hawks.

Thought For The Day 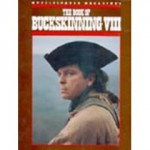 Writing for The Book of Buckskinning viii, Richard Patton is quoted “My thousands of hours spent in abject primitive circumstances taught me that the comforts of technology have nothing to do with happiness, contentment or fulfilment.” And “……nothing that really matters is much altered by technology.”