That statement should be heralded with confidence as the smell of campfires beckons all true Longhunters and Trappers. Fresh autumn mornings and long sunny days draw us like bees to a honeypot. Who can resist these shining times?

In 2018 the local fur market crashed and Trappers stayed away from the mountains in droves. “Five dollars? It’ll be a cold day in hell before I sell my plews for five dollars”.  Or so it seemed!

The downturn in furs reflected in the numbers of hivernants attending our camps. And those who made the trek into the Painted Pony Plains were too busy having a great time to bother to record the events – so no stories and few photos survived for our newsletter. Thankfully Le Reynard ventured to one of his favoured fowling locations and entertains us all herewith with an account of his last day of duck season for 2018.

Last Day: A Scout Along the River.

The closing of Open Season brings mixed memories both good and sometimes sad. Sad because we then reflect on missed hunts in the field due to the commitments of modern living, chasing the cursed dollar, or sometimes health restraints.

After just three short months of being able to hunt waterfowl in Victoria, the final day of the season arrived. I just had to make the most of this particularly fine day promised by the weather bureau. The preceding few days of intermittent showers seemed just right for water birds of all variety. Great for ducks!

But where to go to rendezvous with the ducks? My reminiscing took me back a few years to another hunt when Jeff (aka Griz) Clarke and I had some good hunting along the banks of the Loddon river. I recalled there was good access to the water, plenty of cover and shade, and where reasonable numbers of birds might be found resting on the bends of the river. Here the river currents slow, snaking their way through the country-side to eventually end their journey flowing into the magnificent Murray River.

The next decision to make was what fowling piece to use. For most of the season I had favoured using my double-barrelled percussion shotgun “Old Reliable” with very good success. But for this hunt “Precious” my 12 gauge flintlock fowler from Green River Rifle Works was to be my gun of choice.

The decision made, I packed all the fixin’s for Precious, then a tin cup, a small kettle, tea, water-bottle, oat-cakes and some fruit into the “mule” and made for the Loddon.  After an hour and a half journey I arrived at that old familiar camping spot.

The recent showers had made the ground damp which was good in one way – no crunching on dry leaves whilst trying to sneak up on any of the ever-alert birds. But the muddy banks of the river would be rather slippery, especially as I was wearing moccasins and as I would find out later.

Meanwhile I set up a cooking tripod made from three small branches tied together at the top with a length of small chain, then filled the little kettle with fresh water and gathered what dry bits of wood I could find. Finding dry tinder was the challenge but after searching high and low under bushes, bark and such I managed to secure enough.

After a few choice words to the tinder I managed to start a small fire and was then able to sit back and enjoy a cup of tea and my oatcakes under the leafy canopy of the red gums and box trees – being serenaded by the wild life in the lignum bushes and branches nearby. I was soon brought back to reality when the unmistakable “meow” of the wood ducks filtered to my ears.

Time to gear-up and prepare Precious for the work ahead. Powder, wad, shot, over shot card in place, and the pan primed the hunt was on. As the ducks were not that far away, I was able to follow a low depression that ran parallel to the river and just stopping for a minute to get a more precise location of where the wood ducks were, I was able to use the cover of the lignum bushes and trees to get near them.

But like many good plans, they can easily come undone. A lone male wood duck was keeping sentry on the opposite bank. He had excellent eye-sight and for a split second we stared at each other until he realised that the “thing” opposite him was neither bush nor branch.

He launched himself into the air, wings beating double time to get some distance between us. Instinctively Precious came up to the shoulder and swung past the beak of the Woodie. With a shower of fat sparks, a quick puff of smoke and flame, the main charge erupted into life to send a load of number four shot towards its destination.

The shot was true and through the haze of black powder smoke the shadowy figure of a bird tumbling towards the water. One for the bag, now only to retrieve it. The current in the river was slightly fast and it soon carried the bird 35-45 yards downstream, it staying all the while in the middle of the current.

Having no dog at the time it looked like I might have to go for a morning swim. But fortunately, a tree had fallen into the stream a little further on and that Woodie came to rest caught in the branches about ten to twelve yards from the water’s edge.

The trunk was wide enough to walk on, so I took off my hunting pouch and left Precious on the bank and carefully made my way out onto the makeshift “bridge”. Now as I mentioned earlier, mud and moccasins are not a good mix. When I was about half way out and the tree trunk was getting thinner, I was starting to slip and the prospect of an undesired dip into the river was looking a probability.

With a flailing of arms and a quick grab of a secure branch I was able to regain my balance. I stopped for a moment, took a few deep breaths to regain my composure and proceeded on a few more cautious steps. Reaching down I was able to retrieve my bird and throw him back onto the bank. Cautiously I turned around and with a great deal more care I made my way back along the tree trunk to the river bank, safe and sound. That Woodie was quickly stowed in my game bag and I made my way back to camp, re stoked my little fire and was soon toasting my success with a nice brew of tea.

With my spirit revitalised I again readied Precious with a fresh charge of powder and shot and moved off upstream to see if any other ducks were resting on the river’s edge. I carefully made my way along the slippery bank for a few hundred yards without sighting any ducks, I came up on to the top of the bank where I could make easier progress.

It was now easier to check a few bends that had usually carried a few birds on past hunts. Sure enough, on another fallen tree trunk in the river, a pair of teal were perched about 60 yards away. Due to the excellent lignum cover they had not seen me.

I backed out quietly and made a large loop around to their position and came up on them from a 90-degree angle. As the tree was still alive some green branches now blocked my view and I was not sure if the birds were still there. Whilst adjusting my line of sight the teal heard me and both slipped off their perch into the water and heading downstream with the current.

As they floated past where I was concealed, they soon saw what had disturbed their rest and they smartly lifted off the water. By the time I brought Precious into action they had gained some distance, so I gave some extra lead on the rear bird as I touched off the shot. Through the smoke and flame I heard a splash, but due to the range I had only winged the bird.

Quickly reloading I then moved downstream to get the follow-up shot. But the teal decided to play hide and seek and as soon as I lined it up for the coup de grace it dived under the water and going with the current it would reappear on the surface some 30-40 yards away. This game continued for about 100 – 150 yards from where the first shot had been, when finally, I was a bit quicker getting the shot off and despatching the teal.

The flow of the river was kind to me this time as it steered the bird to the water’s edge and I had only to kneel down to pick it up and pop it in my game bag. I was happy enough with two birds in the bag as I returned to base for a bite of lunch. Precious received some appropriate attention to remove black powder residue; the fire was thoroughly doused.

I proceeded home to clean the two ducks in preparation for the table at a later date; and to give Precious a proper clean for a job well done for the “last day”. 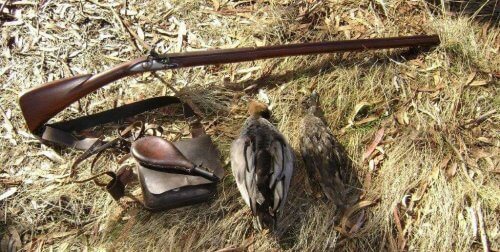 The prospect of extending an Easter camp to include ANZAC day and then the following weekend must be exciting if you’re up to it.