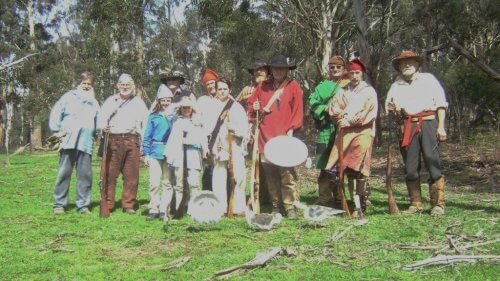 Mountain men, Trappers, Flatlanders, Voyagers, Woodsmen and Longhunters gathered together for our inaugural Great Southern Turkey Shoot. Well it wasn’t planned to be as such and I’ll admit only the club stalwarts had gathered. It’s just that we had so much fun at this Eastern style shoot, we straightaway decided it should continue each September. Like, put a turkey in the freezer for Thanksgiving. Peter Convey had hatched out a veritable flock of steel turkey targets and painted them up a treat. No bloody use in the freezer but really good fun to shoot.

Competitors were to cull their Thanksgiving dinner from five differing steel cut-out turkey shapes of varying sizes representing differing ranges. A maximum of three shots were allowed for each target with points scored on hits. A one shot kill gained 10 points, if a second shot was needed the points dropped to five, while if a third shot was required only one point was allotted – if a hit. Got that? I’m not writing it again!

Only head shots and body vitals shots counted. Tail feathers consisted of rubber mock ups that didn’t ring true and so scored didly squat. As is often the case, Murphy was there to ensure that otherwise slick operating flinters suddenly become troublesome, or failed completely; so one dead (out of the comp hunter), and others struggling! Flintlocks are pure fun and asking shooters to simulate turkey yelps augments that fun.

Overall winner was Tom Jefferies scoring 40 – four tens followed by three misses on the last target. Duh! The Convey brothers did quite well also, Ian and Murray both on 31, Peter on 30. Chook was a very close last – again!

We might all have done better with a smoothbore but only rifles were permitted for this event. Tom won a huge porcelain turkey platter, a few slaps on the back and a wee dram. Special thanks must go to Peter Convey for organising this wild turkey clutch. This was a superb event. Gobble, gobble, gobble!

Later in the afternoon we contrived a Can Push with a Twist. There’s always something lively about a can push event. it’s a real hoot to watch those cans fly after a good hit. This time we decided to use cans of differing sizes. Cans were numbered on the base and participants drew from a pack of cards for their allotted number.

Our President drew a 500-gram coffee can – the largest can in the herd. Ian could count all the hits easily but they barely moved that oversize can forward two inches. Jenny drew the smallest can and promptly sent it flying sideways, over the fence and Out! Backyard cricket rules! John Morland’s accurate shooting was driving his standard size can many yards up the range; he did that enough times to win a large block of plain primitive wrapped chocolate.

Our Saturday night party was one of the liveliest we’ve seen in a while. Ian was on lead guitar, Judy playing her ukulele and Murray joined in on banjo while a random miscellaneous chorus kept raising a ruckus till late.

An interlude of hot crunchy damper, dark plum jam and cream, whilst 100 yards up the hill the burning windrow flared and sparked into the frosty night air. A somewhat poor substitute for those older pilgrims who still savour fond memories of Guy Fawkes night with fiercely burning bonfires, sky rockets, Catherine wheels, Jumping Jacks and threepenny bungers. Oh, but the latter can still be fashioned on short call.

Remember, remember the fifth of November

The gunpowder, treason and plot,

I know of no reason why the gunpowder treason

Should ever be forgot.

So there I was trekking the lounge room Wiki trail, seeking a clear path of historic info on my Camp oven. Now camp ovens are also called Dutch ovens and by various other names; like Bedourie oven – supposedly an Australian term, but seemingly known by this name only to a smattering of pilgrims in far north Queensland.

Anyway I was amazed to learn that the Dutch (Camp) oven was the official State cooking pot of Utah. Wow, now there’s recognition for ya! The “Official Pot” by golly! Further exploration uncovered similar State tributes from Texas and Arkansas.

I hurried along a side trail seeking if we Victorians had an “official” cooking vessel. But no sign! Well surely to goodness there is an official national pot for Australia? Like, I can read sign dammit, yet there was absolutely none! Could it be that “our pot” was jettisoned in far north Queensland along with six of the Endeavour’s cannon?

All I found were references to EBay and Gumtree adverts of various ovens “For Sale”. Fancy selling off family cast iron history I thought. We should have an Official Rendezvous pot I thought. We can work on that! Well I’ll admit to having these crazy ideas at times. Anyhow, here is some stuff I learned travelling on the cast iron trail.

In 1997 Utah State Legislature designated the Dutch Oven as the State Cooking Pot. Utah conducts an annual World Championship Dutch Oven Cook-off – a major event. Apparently most Utahans consider Dutch ovens as indispensable and cook with them on a regular daily/weekly basis. The competition at the Cook-off is bound to be fierce!

Wiki* tells us “Explorers like Jim Bridger and Peter Skene Ogden used the kettle versions on the trail, but appreciated the standard three-legged, flat top with a rim version when they wintered in.  Mountain men who rendezvoused in Cache Valley in the 1820’s used them and Osborne Russell in his Journal of a Trapper writes about how much they appreciated having some greasy, Grizzly bear meat to cook because the cast-iron pots needed re-seasoning after boiling roots for meals the previous eleven days.”           * https://en.wikipedia.org/wiki/Dutch_oven

“Pioneer trains gearing up near Independence, Missouri were given a list of essentials with the Dutch oven at the top of the list. The people-powered handcart companies chose to include the heavy pots for their long pull to Utah and the miners digging in the canyons around Bingham, Price and Cedar City counted the black pots almost as essential as their picks.”

“The ovens were so valuable that wills in the 18th and 19th centuries frequently spelled out the desired inheritor. For example, Mary Ball Washington (mother of President George Washington) specified in her will, dated 20 May 1788, that one-half of her “iron kitchen furniture” should go to her grandson, and the other half to a granddaughter. This bequest included several Dutch ovens.”

“Westward bound settlers took Dutch ovens with them. A Dutch oven was among the gear Lewis and Clark carried when they explored the great American Northwest in 1804–1806. Nowadays it is considered a unique and generational bonding experience for families to gather around a campfire after a meal from the same kind of Camp (Dutch) ovens and tell of the history and stories about their pioneer ancestors.”

Charlie has been known to flavour the truth, just as he stretches each tea-bag to the limits for flavour, leaving the same steeped for many cups. Twenty cups from a single bag just might be possible. So we were all sitting comfortably by the fire in the open-faced shelter, Charlie in his usual possie on three legged stool near to the elements, the lull in conversation suddenly shattered by sounds akin to violent spewing. Charlie’s tea-leaf spitting and spluttering “My tea-bag just shit itself” had everyone in hysterics.

It had stood safely in the corner of the shed for years! Broken out sporadically for special occasions, like Duck Opening, or to dispatch a marauding fox in the hen house. Then the old man died! After which the protective oil gradually dried out exposing the metal to moist air, then rust. Slowly the moisture seeped into the quality walnut stock as the rot set in. It’s enough to make strong men and women cry. Borrow your hanky?

Our Volume 56 featured the notification picture of an original smoothbore back-action cap lock in relic condition. It was rusted something chronic, seized up lock and triggers, rotting stock crumbling along the barrel channel. Barrel wedge and escutcheons were completely missing, a rusted entry thimble somehow clung to the stock and there was evidence there had once been a nose cap. It looked like scrap junk!

Ever had one of those days when you feel ready for the scrapheap? Me too! Perhaps that is why I was drawn to this fowling wreck? A conversation piece in which I could see perhaps some wall-hanger quality remained. The gun had been built with cast off that suited me to a tee. The badly pitted barrel was held on by duct tape but the gun still came up to shoulder looking straight over the tube. Modern off-the-shelf guns often lack that feature together with any old charm or charisma. Patina – just love it!

I made the owner an offer, it wasn’t much; I didn’t need a scrap iron wall piece. But there was, until now, an undisclosed tenacity in my bid. It was the gun’s tapered ramrod! Its fitted iron tip had originally contained a covered patch worm but that had all rusted to mere fragments. The belled brass fitting had survived in reasonable shape.

However, the rod itself, made of fine ebony, remains in pristine condition. A testimony to quality timber! It was this slim stick of dark wood that had me hooked. I paid for that rusty wall decorator without batting an eye. Whooping all the way home!

Don’t ya wanna have fun no more?

Our very first “Around the Traps” newsletter issued in November 2006, now ten years later we reach volume 57. Can you believe it: 10 years and 57 volumes of club doings, talking history, tattler tales, half-truths, good shoots and having lots of fun making history of our own?

Congratulations to all contributors far and wide, and to all Free Trappers on a full decade of sharing the pleasures in picture and print. Thanks to those who responded on our web page, also to our many silent supporters; we invite you all to continue to share our enthusiasm for the black powder shooting sports – re-enacting a bygone era.

Season’s Greetings, safe and happy festivities and a very Merry Christmas to all.