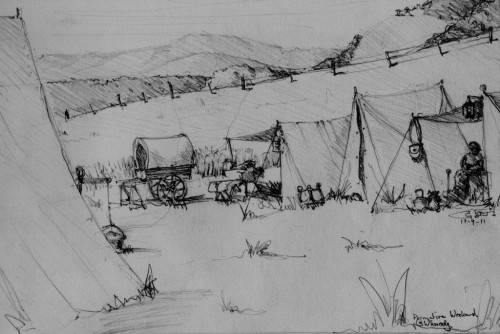 Congratulations to all who attended our September Rondyvoo. You were each an important part of the largest Primitive Rendezvous seen under the Southern Cross for many a long year. With seventeen truly primitive camps it was easy to step back into a time zone of pre-1840.

Over 30 participants, adults, teens and younguns had all made best efforts to dress correctly in the various styles of our chosen era – it was in fact a magnificent endeavour. Time and time again were heard voiced comments along the lines of “It’s just like the good old days” no doubt referring to our many perceptions of the 1838 Rendezvous at the junction of Popo Agie and the Wind River.

But this was Beaver Creek, Whorouly, Victoria. Down Under! And those attending had answered our Vol. 33 newsletter appeal for greater numbers of Trade Blankets. Nigh on everyone put out a Trade Blanket; with exceptionally fine efforts made by Jenny and Gary Baker with their Grand Portage Trading Post and by Bill Lincoln’s travelling Sutler’s Store covered wagonette all the way from Sydney town.

The anticipation of Trade Blanket bargains is an exciting facet of Rondyvoo. Displayed blankets are great people-mixers as folk move from one blanket to the next exchanging greetings, a hand shake or a hearty back-slap, or a joke like “I thought you were dead” and always, always, seeking that elusive bargain. Our featured pencil sketches by artist Charlie Timma invoke the spirit of Alfred Jacob Miller and are a true pre-1840 style of illustration of the Rendezvous life we attempt to emulate. 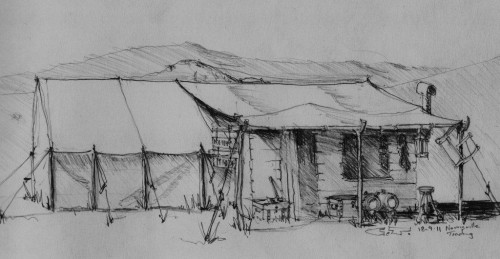 Friday the 16th September saw most Buckskinners / Longhunters arrive to set up camp and by evening we had a large circle of camp-fires with rising blue smoke wafting into the clear night air. The weather was simply perfect for camping and would remain so for the next three days.

Mild to warm sunny days and clear crisp evenings when folk gather, fires are stoked, a few songs sung and many stories (some short, some tall) are told. More campers would arrive on Saturday and several guests (moderns) had arranged to visit us over the weekend as well. We always welcome such opportunity to introduce new chums to our kind of fun.

By Saturday morning the entire camp was in a frenzy of trade blanket bargaining, so it took some effort to rustle up contestants for the several shooting challenges. A card-sharp Blanket Shoot finally got under way with a dozen gambling on their flinters, their skill and perhaps Lady Luck. Peter Hawkey and Charlie Timma both held good cards but were finally trumped by the late run arrival of the fox, Paul “Le Reynard” Sly.

Our traditional Mountain Man hunt was once again in the scheming hands of Bob Ellis and Glen Mitchell. But, this time, the devious duo led everyone “up the creek” instead of the usual go-with-the-flow beaver waters. The event is scored based on the number of game targets seen and successful shots taken from within a limited and defined area and it is also timed as an additional method to separate any tied scores. 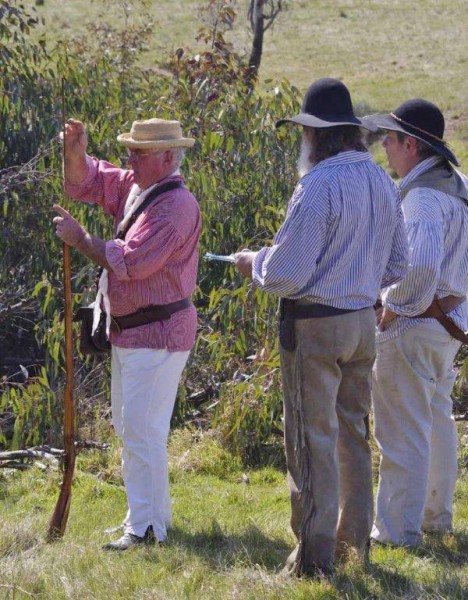 The entry fee is to place a suitable vegetable in the cane basket which, along with a full size Turkey Plate, forms the winning prize. We have yet to ask the winner to cook up a vegetable stew for the whole camp. It could happen! Anyway the top hunter of the day is given privilege to draw a name from the hat for a winner of the coveted Club prize.

As in real life hunting, slow and steady, is usually the best way to success. Without mentioning names here, it is interesting to note that the two lowest scores were attributed to the two fastest times. Conversely, the high scorer, Le Reynard, once again, was only 15 seconds short of the slowest time. That particular drawn out timing went to our happy-go-lucky Sutler who was no doubt worn and weary from the 500 miles he’d travelled just to get to rendezvous. Or perhaps it was just those super comfy wooden clogs that slowed him down? 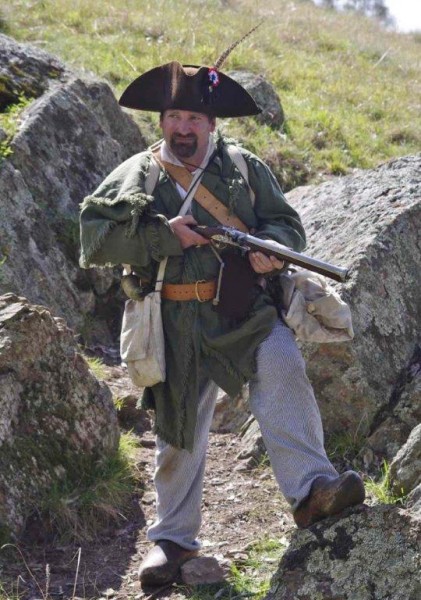 Billy Lincoln – hunting with a blunderbuss? Well, don’t ya wanna have fun no more? Photo by Anthea.

After lunch we held our Annual General Meeting, guests were invited to sit in or otherwise attend their own devices. Like a good captain Ian steered a tight ship and the meeting business was soon over (apart from the usual blather from Chook). All Committee were available for re-election and there being no further nominations, all were re-instated as previously.

Following the AGM a team Stake Shoot challenge was issued by Kevin. Jenny Baker quickly accepted the challenge and soon recruited Ian, Hawkey and husband Gary. Backing Kevin were Ron, Paul and Charlie. After numerous shots at their resilient stake, hanging, clinging by a mere thread, Kevin’s team proved victorious and then took great delight in helping to cut the opposition to shreds.– All this fun just to win two jars of confectionery all-sorts to share around the evening fires. But, oh, the prestige! 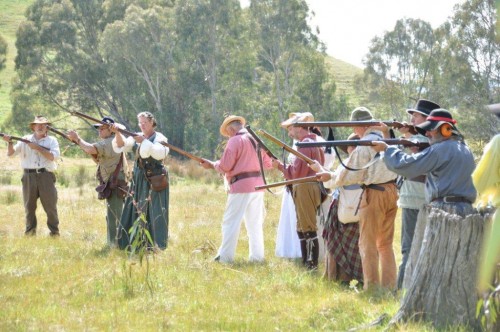 Meanwhile, Paul and Lisa’s young lads were skinny dipping in the creek between the simulated beaver dams, whereas Michelle’s older, more mature younguns merely splashed and waded in a befittingly dignified teen fashion in the refreshing waters.

Ian was keen for a Candle Snuff Shoot (where the shot must extinguish the flame but not injure the candle). This was conducted in twilight so that the flame could be easier seen and that the evening Happy Hour following it would not be too delayed. Everyone enjoyed the challenge while Jim notably blew out the flame, smashed up the candle and buried it, all in the same shot. Ian won the event with his 20 gauge smoothbore. It is strongly suspected that he had previously trained especially for this event!

Paul “le Reynard” Sly was asked to draw a winner for our main Club prize. We had purchased a fine Glen Mitchell tomahawk deemed a most suitable accoutrement for the purpose. And the lucky winner, the late arrival, by the skin of his teeth you could say, was Justin Fletcher. Seated at the main campfire later on, Justin regaled us with some fine renditions of our favourite John Williamson true blue Aussie songs. Later Louise combined in a duet with Justin singing a lovely Lakota Indian chant. 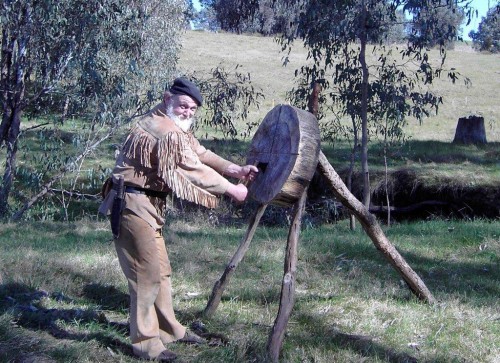 In the morning Dick Schwer asked Ian if a Knife & Hawk event could be arranged. Dick did! Ever obliging, Ian said “Sure thing! You organise it Dick, that way you can make it so that Dick’s rules apply.” And so it was! Now with no word of a lie I can say that lovely Lyne Gray scored better than Charlie Timma, John Sultana, and, wait for it…. and better than her man – Bob Ellis. True as here I write! Dick’s Rules, remember! But it was Ronnie Davis who outscored all contestants with an unbeatable throwing session with both his hawk & knife.

Lastly we held a 45 yard Gong Shoot. An attractive and handy little woven bag hand-made and donated by Jenny Baker would be up for grabs. Hotly contested as it was, this final challenge was concluded with an admirable win by Peter Hawkey. 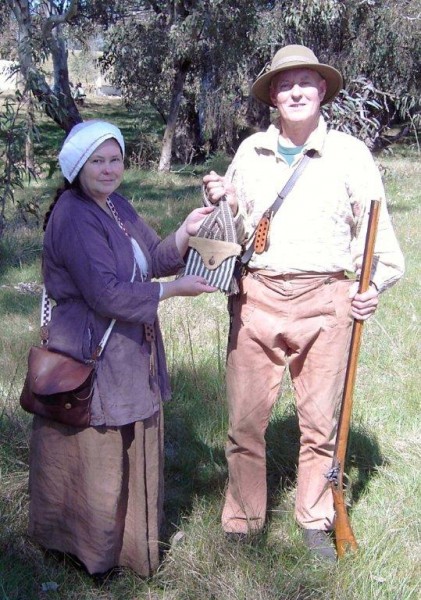 Glen and Anthea Mitchell donated a tent “door prize” if I can call it that. Names were drawn from the nearest tattered hat – The lucky campers were our very newest members – Michelle Barraclough and John Sultana. A small hand-made leather and fabric carry-all wallet made by Jenny Baker was included with the bottle of fine wine. A warm welcome to the Free Trappers is extended to John, Michelle and family. 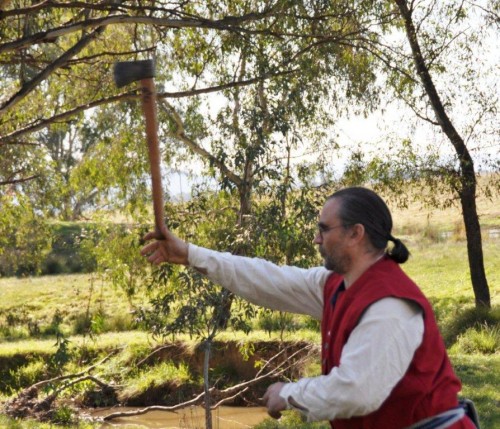 John Sultana in action at the hawk block.  Photo by Ben Barraclough.

Unfortunately, weekends seem all too short and Sunday saw many camps mostly reluctant to pack away and leave. But leave they must and yet Monday was a superb day of idyllic warmth and sunshine. It was left to Glen Mitchell, Bob Ellis, Ian Convey, Jim Walker and the Chookster to seek a little shade and relax quietly throughout Monday while recounting the pleasures of the weekend and discussing future plans.

Sincere thanks to Rolly and Jo and family for country hospitality. We left nothing behind, save for some excess firewood, neatly stacked, and a few patches of flattened grass. After a perfect long weekend it rained heavily sometime late Monday night. As Veronica and Clive lamented when they were unable to attend – “Well you couldn’t have ordered better weather for a September Rendez-vous if you’d tried!”

The weekend of 6th & 7th August was not kind to the Beechworth townsfolk or tourists; but only because the weather was mainly cold and wet or vice versa. The hospitality of the region was just as pleasant as ever. Bob Ellis and I had arrived early Friday afternoon to set up our tent display in support of the Beechworth Historical Re-enactment Group. Every year these fellows escort poor Ned into the stone courthouse to face charges of murder – it’s the stuff of legend.

We had a glorious afternoon to erect the tents followed by a pleasant evening spent chatting quietly and sipping a brew by our campfire. We are indebted to the “Prisoners on the Run” who had kindly supplied us a welcome and ample stack of firewood against the wall of the old police stables. This was handy to the formed fireplace beside our tents and the spot that we would call home for two days.

Glen Mitchell arrived to add weight to our presentation on Saturday. The rain had commenced sometime overnight, but could not dampen our spirits. As for the other kind – we managed to keep them securely corked until happy hour that evening. 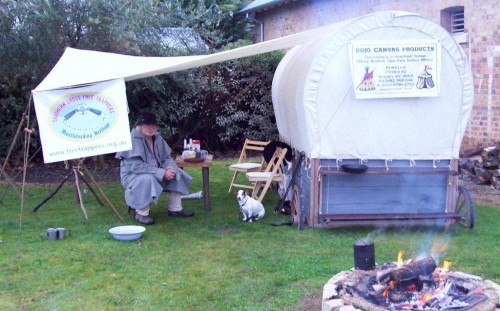 A rainy day in Beechworth.  Photo by Bob Ellis.

From under the cover of the canvas awning of Bob’s wagon we were witness to some fine re-enacting of Ned, the constabulary and the town judiciary. Bob and I both awarded our personal “best camp” and “best re-enactor” to Andrew Swift of the Harrietville Miners Association. Andrew was portraying an unlicensed gold prospector, who’d staked a claim right there in the police paddock, of all the dashed silly places. You can guarantee the Joe’s roughed him up a little. All in the name of having fun, of course!

Regardless of weather, it’s a great weekend at historic Beechworth and an excellent opportunity to practise persona styles, or simply soak up the tourist atmosphere. We’ll be back there next August! It’s great fun; hope you’ll join us at next year’s festival.

Whilst reading a back issue of Richie’s magazine – The Backwoodsman, I noted the following – “In some opinions the way people camp they may as well stay at home because they’re trying to take all the comforts of home with them.” Now that is not to imply that anyone should stay home, only to leave some of the comforts behind. Remember – Less is best! And a whole lot easier when it’s time to pack for home. 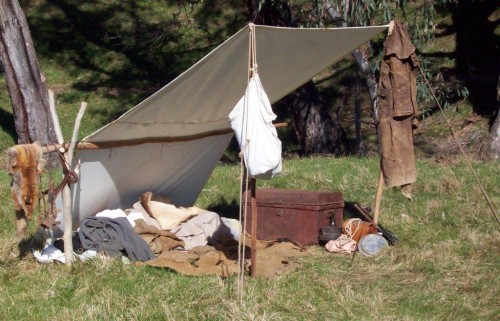