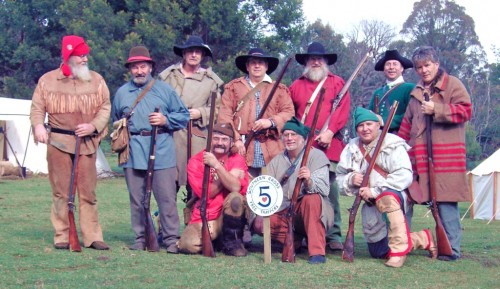 Our 5th Anniversary of Winter Quarters rendezvous on the June Queen’s Birthday holiday long weekend got off to a surprise start with six members arriving a day early, each determined to make the fun go even further. Paul was so early that Bernie had to be awoken to move the farm wagon blocking the track past the horse corral. Apparently Judy was staying over at her mum’s and Bernie was enjoying a sneak sleep-in, but who’s telling?

The weather man promised rain and didn’t disappoint, but it did hold off long enough for camps to be set up and vehicles to be removed out of sight of our Winter Quarters. Jim had checked the grounds a week earlier and had left a trail of cut firewood – mostly from a conveniently close gum tree that had fallen in a past storm. We sat around a blazing fire well into the evening before steady rain spitting and hissing in the flames forced us all to retire. It really is a pleasant way to fall asleep – listening to a gentle rain on canvas roof, cosy and warm and snug!

Saturday’s dawn sky threatening more rain, but that’s all. More Trappers were arriving and soon we had ten camps, each with cooking fires and of course the main communal campfire stoked by Jim. With chores all done it was time for some shooting fun at small game woodcuts and other eye openers. Ah, the crack of a well- tuned flinter, the smell of the black powder, oops, a miss, bugger, load her up again!

The main event of the afternoon was a simulated French–Indian War scenario concocted by Ian. A lone French Officer was spying out the Free Trapper camps aided by three mighty fearsome painted warriors from the Allegong-gong nation. Caught alone whilst tending their traps, each Trapper had to silently despatch that knotty Frenchman with their tomahawk, then turn their rifle onto each of the three skulking hostiles.

This was a timed event where each contestant had to set a trap, stick their hawk, shoot three gongs, each at a different range and direction, return to unset the trap and finish using flint and steel to light a fire. Any miss meant that a second throw or a second shot had to be taken at that target for a maximum of two throws and six shots. The clock stopping with the fire lighting but only when some tinder was burning strongly! 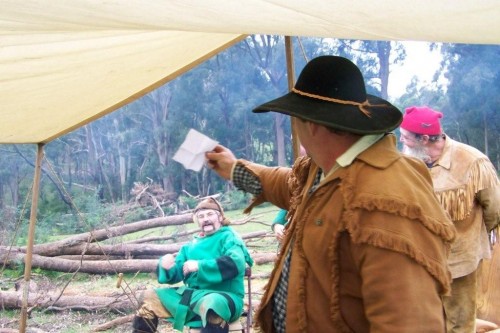 Glen draws a name from the hat – “Its Murray!” Photo by Jim

Congratulations go to Glen Mitchell who completed the task with one throw and the minimum three shots, and was declared the overall winner. Several Trappers with somewhat better times failed the fire lighting finale. (See all the times later in this newsletter.) Glen won a fine bottle of wine and a block of chocolate and the pleasure of drawing the winning participant’s name for our splendid priming horn prize. Club treasurer, Murray, suddenly found himself on a winning break with Lady Luck.

A delighted Murray displays his prize – the Orville Mumma made priming horn. Photo by Jim.

We whiled away Saturday night gathered around a roaring fire, occasionally catching strains of the warlike distant drums of the Rover’s Rangers. But we had far more pleasant and soothing guitar playing and singing by Justin, with Ian and John Morland also picking a few Smokey Mountain melodies – Winter Quarters at its best!

I awoke in the morning with a Kris Kristofferson tune in my brain. The weather showed promise of better shooting conditions, but the Chook did not! Sunday’s main event was the Germanic style one-shot Anniversary shoot. Ian had hand painted a large plaque to celebrate our 5th Anniversary. Inside the curling tail of the number 5 Ian painted a red weeping heart. Contestants were allowed one shot only with the win going to whoever shot closest to the centre of the heart. Congratulations were in order again to Murray who was still posing with lucky smiles half an hour later. 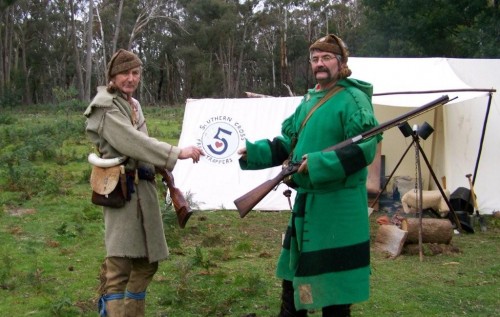 Our fund raiser raffle for the Voyager cap with sterling silver Celtic pin donated by Noel Collinson was encouragingly well supported. This time Paul Sly’s lucky number was drawn from the barrel. Paul commented that he could use a new cap as he has a couple of junior Voyagers wanting to share his old caps. 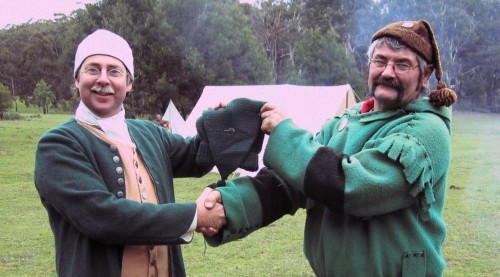 The rest of the day was left open to individual choice of pastimes – running ball, shooting, pony watching, and camp cooking experiments, guitar practice and gold panning were some of these activities.

Once again our hosts Bernie and Judy visited our camp fire after dark for a yarn or three. Bernie cooked up another of his damper specials. Thickly sliced while still hot and smothered in Judy’s home-made apricot jam (Murray still enjoying his luck) that large damper was devoured in very short order by appreciative Trappers. Later in the evening we enjoyed some more music with Justin playing softly into the chilly night. 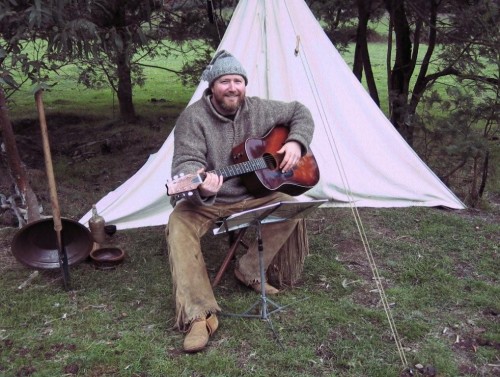 Monday’s dawn came white with a heavy frost melting slowly into a wonderful sunny day, but alas, some members needed to break camp early to return to the 21st century before midday; others had only a few hours extra. Special thanks once again to hosts Bernie and Judy; also to Jim for wood cutting and early morning heating; to Justin for the fine picking and Ian for target painting and organising the shoots.

Thanks once more also to Noel Collinson and to Orville Mumma of Pennsylvania for making available our major event prize – a truly sumptuous little horn. All-in-all I’m sure everyone had a marvellous time as all the feedback has been positively glowing.

Bob Spencer quipped in his Black Powder Notebook “There is no such thing as an unsuccessful camp if your mind is properly attuned.” I reckon we’d all agree to that!

In the order of participation:

The ability to quickly produce a life saving warm fire was considered a vital skill to survival after the mock attack. Those marked with an * managed to catch spark in char cloth but failed to maintain flame in tinder on first attempt. Those with double ** were not carrying full fire lighting equipment.

On his regular walk to buy the morning paper, club President Ian, was deep in reverie when, inspired by the sight of the nearby bush clad hills of the Wombat forest, the lines of a school learnt poem by Robbie Burns came flooding o’er him. Maybe part of Ian was already back at rendezvous somewhere near Victoria’s central Highlands?

Care of your horn – President’s recipe

Powder horns and other horn vessels and utensils attract various insects which chew or bore holes into the horn if we do not protect it. To prevent these insects from eating into your powder horn, horn cup or similar items put naphthalene flakes (moth balls) in the plunder box where you keep the horn. Also, to retain the finish of your horn, try an occasional application of boiled linseed mixed 50/50 with kerosene rubbed sparingly into the horn and wooden plug.

Paul follows up his Vol 24 report on duck opening with this end-of-season detail: “Here’s a self-taken photo I took on the last day of the 2010 duck season. The weather was very ordinary that day but it did ease up for about a half hour – just long enough to get in a few shots harvesting these two Blackies before the rain set in again. I was using my 12 gauge flinter with my standard load of 1¼ oz of No. 4 shot over 70 grains of powder.”

“Over the short season I despatched five ducks with “Precious” – my single barrel 12 ga. flintlock, three birds with my D/B percussion muzzleloader and two with a Damascus D/B breechloader. I was unfortunate to lose two birds on occasion when I should have had the dog with me. My total bag for the 2010 season was 10 birds all brought down using black powder. See you round the traps!” Le Reynard. 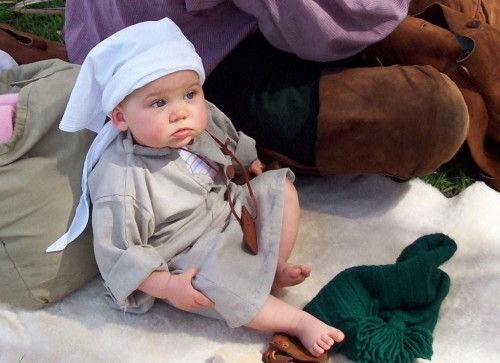 September 17th – 20th. Spring Rendezvous, AGM, and shoot with friends at Beaver Creek, our picturesque camp site at Whorouly with Mt Buffalo towering on the horizon. This year it’s an extended single weekend only – Friday 17th through to Monday 20th. Directions available from any Committee member.

Recent improvements include additional Gallery photos, fixing broken links and updating our Trading Post ads. We also received a very interesting response and feed back about the Remington flintlock custom shop specials via our Vol. 21 forum. Read the significant response from Mike Butler about the Hatfield connection at http://freetrappers.org.au/2009/12/02/vol-21-december-2009/#comments