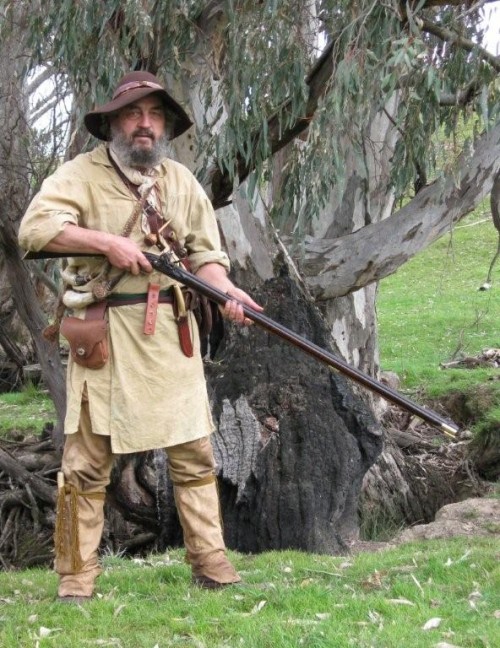 Richard Snape on the game trail along Beaver Creek. Photo by Kevin.

You’ve waited all year for this…

Sept 19th/20th thru to 26/27th Primitive Rendezvous at Beaver Creek, Whorouly.
Take a break from the mundane and live the past eras of your dreams. Main events are Sat 19th / Sun 20th when Glen & Jim will guide for a Mountain Man Hunt, but why not add a full week of relaxing camp life among friends below that big old Mt Buffalo?

Please note – Vehicles are not to venture past the designated parking area unless unloading/ loading during set-up on arrival and departure. Need directions to our Rondyvoo? Contact the secretary or any Committee member.

We plan another fun auction of donated items, so please bring any surplus-to-need items to support Club coffers. We have already received a very nice leather Civil War pouch and several other treasures so be ready with your gold or promissory notes when you hear the auctioneer’s call. “I’ve got the gold, Pa!”

Glen Mitchell and Noel Collinson have kindly donated towards our two fund-raiser raffles to be drawn at Beaver Creek Rendezvous. Tickets a steal at $2 each on that beaut ram’s-head fire-poker raffle, and a mere one dollar will have you in the running for a classy French-Indian wars era woollen voyager cap with solid silver Celtic clasp.

Members are reminded to return any borrowed books or magazines for exchange at Rendezvous. New members are directed to Richard Snape, our Librarian, who holds a nice variety of literature relating to black powder firearms, rendezvous how-to, Longhunters, Mountain Men and etc. for easy loans at modest Club fees.

Please ensure you carry your current firearms licence whilst travelling to and attending rendezvous.

The Free Trappers attended our first meeting as a member of the Council of Muzzleloaders in June where discussions highlighted lifting the profile of Black Powder sports as a priority. The delegates resolved to request and man a display table at the 20th Eureka Collectable Militaria Fair held on 11th July.

Attending this Fair were Murray Convey, representing the Western Districts Muzzleloaders, Jim Walker, representing Seymour Black Powder Club, and John Fowler representing the Southern Cross Free Trappers. All three arrived early as display table set-up was allowed from 7am and the Fair opened to the public from 9.30am till 3.30pm.

In spite of the absolutely foul weather of high winds and constant showers there was an excellent turn out by the public, and the three delegates were kept busy all day with various enquiries about the activities of the respective Clubs, about black powder guns and other paraphernalia we had on display and the sorts of events we enjoy.

At least one new member for Western Districts resulted from out attendance. Also, a few dormant and or former club members of both WDML & SBPC expressed intent to return to black powder having perceived a general resurgence of interest illustrated in our photo displays.

The full benefits of our attendance may take time to become apparent, however Jim, Murray and John all agreed that the Council of Muzzleloaders presence had been a very worthwhile promotion. It was felt that the Council should make every attempt to profile the fun of black powder sports with displays at other regional arms fairs.

Toward the end of July I was on a “longhunt” for goats in scrubby bush country near Narrandera NSW. The weather was cool and showery so I decided to adopt an early 19th century hunter look rather than my mid 18th century persona. The woollen trousers and high top boots were just “the ticket” for this foray. 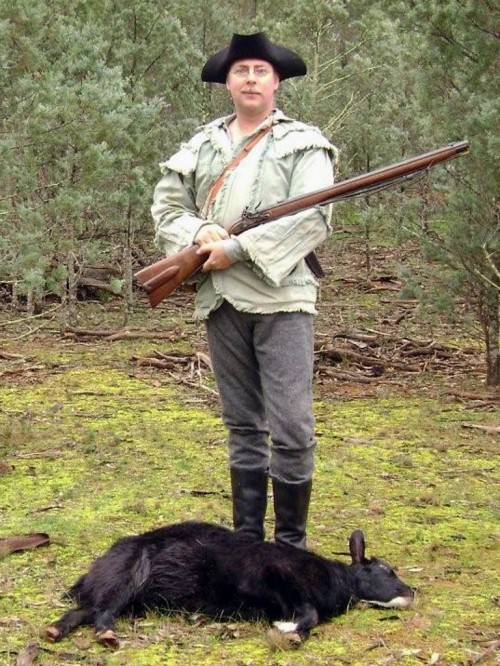 The country here is heavily treed with Murray pine saplings and very similar to that about Millmerran for those lucky enough to have visited the Rendezvous’ there. The saplings here are so thick in parts that the only way to see any distance was to kneel down to peer below the foliage, virtually at ground level. After about one hour of stalking on foot I had bagged one nanny goat but I was keen to take another as this hunt was for meat for two families.

Another hour and a half passed slow stalking and low level squinting through the pines before I could account for the second goat. Another nanny and also in very good condition! By early afternoon the two carcases were cleaned and dressed ready to pack out. The hides were salted down and rolled up ready for tanning at a later date. 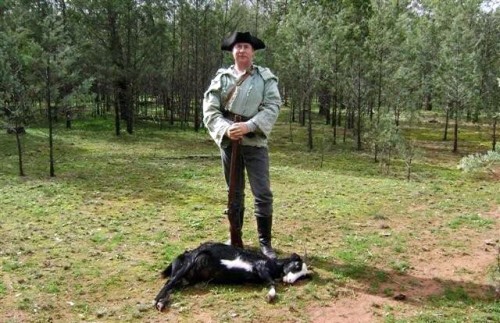 Both animals were butchered into fine cuts, now safely packed in the freezer, awaiting those special occasions when such delicacies are truly appreciated and the hunt is relived – the meal and the story shared with good friends. One is promised to Jeff and Katherine but both are very soon for the dining table. The two goats were taken with my Pedersoli Jaeger .54 cal rifle. The load was 55 grains of 2Fg, a 10 thou patch and a .530 ball. Distance for both shots was approximately 40 yards.

Feel free to share my story in our newsletter; hopefully I will rendezvous with you all at Beaver Creek in the spring. See you around the traps, Le Reynard.

Pro-Pelle-Cutem – Motto of the Hudson Bay Company, meaning for a pelt, a skin.

An old Wildfowler’s Tip from Jim
Ram the Powder, not the Lead,
And you’ll always shoot them dead!

After 2 full days of shared driving, in Bob Ellis’ Jeep wagon, we arrived at Millmerran Township on Monday 6th July, where we bought supplies before heading out 20 kms to the SSAA range at Captains Mountain. Bob and I set up camp in the designated primitive area and observed the very good amenities established about the range by SSAA Qld. There were only 8 or 9 primitive camps, whereas most of the competitors were camped nearby in caravans or modern tent complexes.

The next important chore was to procure sufficient firewood for the next six days and with the help of Mick Taylor and his son we spent the next hour or so cutting wood. At 5.00pm we heard a load explosion- a simulated cannon shot fired to signal the end of the day’s events. It also announced the opening of happy hour at the “Forbes Emporium” bar where all profits were to subsidise the main BBQ on Saturday night. 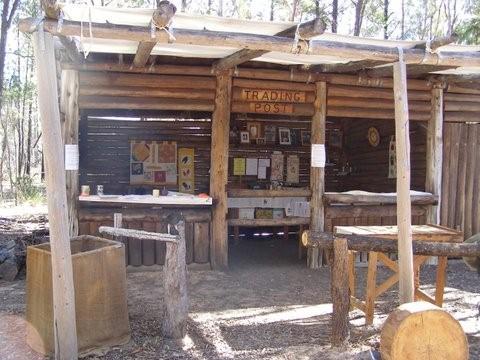 Daily at 7.00am that cannon signal boomed life into all the camps. After breakfast on Tuesday morning Bob and I registered at the trading post – we were competitors 96 & 97 and were listed to shoot the Seneca Run (a walk through shoot) at 2.30 on Thursday. We spent the rest of that day wandering about, visiting other campers, checking trade blankets, yarning or just plain loafing.

Wednesday morning was more visiting, trading, loafing and yarning until about 11.30 when everyone donned their best Buckskinners / muzzleloader clobber and drove to the Millmerran tourist information centre housed in a fibreglass tipi on the outskirts of town. Then with police escort and pipers playing, we marched into town along the main street, where the Mayor welcomed everyone with a fine speech.

The shooters then assembled in lines at the town square while the cannoneers fired a salute. After which all shooters fired a blank volley salute and then a rolling volley. After the smoke had finally cleared most folk dispersed to check out the market and various shops, and then adjourning to the pub for a beer and lunch. It was a heartening sight in the pub to see all the folk in period costume with their firearms resting against the bar wall. As it should be! After lunch everyone slowly drifted back to camp.

The next 2 days were spent shooting events, trading, yarning and observing the way the shoot/rendezvous worked. Bob and I did reasonably well in the Seneca and fair to middling in the rest, Bob doing a lot better than me. Saturday was the shotgun events and you needed 40 shots to compete in them all.

Saturday night saw everyone dressed in their finest clobber for the presentations, bush dance and BBQ. Bob was awarded the prize for best primitive camp for his covered wagon. The night was bloody cold but well provided for by the week’s happy hours. 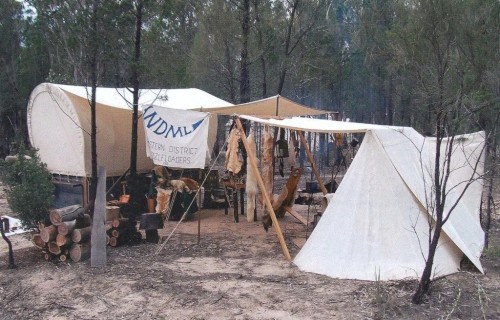 Early Sunday we packed up and left for the two day journey home. All up it was a thoroughly enjoyable week, in which we drank too much, ate too much, traded (spent) a lot, and had lots more fun. In summary I think that the Millmerran rendezvous is a very well organised and run black powder shoot. I recommend that you try to go at least once to experience this unique event.
Ian Convey… X … His mark

We are all travellers in the wilderness of this world, and the best that we can find in our travels is an honest friend. R. L. Stevenson

Black Powder was not initially known or described as “black” powder. Prior to the advent of modern so-called “smokeless” powders the black stuff was quite simply called Gun Powder. Early in 1823 while setting off to rendezvous with the Trappers, three of William Ashley’s men were accidently killed when their wagon loaded with 300 lbs of gun powder exploded. Be alert – Safety with gun powder is no accident!

Attending on August 8th were Colin & Myrtle, Kevin & Robyn, Chook, Bob & Lyne and extended family. The idea was simply to loiter about Bob’s Bojo Canvas Products’ tent display pitched on the old police paddock, and simply talk re-enacting and black powder stuff with any interested tourists. Robyn’s brand new outfit was much admired by all and seemed to fit in perfectly with the Beechworth Court toffs giving poor Ned a hard time of it. Earlier, pitching tents at 7am with white breathe, frozen hands and a crisp frost caused a few grumbles but the day turned pleasantly warm and droves of questioning visitors looked us over. All-in-all it was a wonderful festive day and great publicity for us.

Spring fashion excitement – We’ve revamped our hard-copy newsletter frontispiece to coincide with our new-look website. Vernon has enhanced our site with a little foofaraw and vermilion, so to speak. 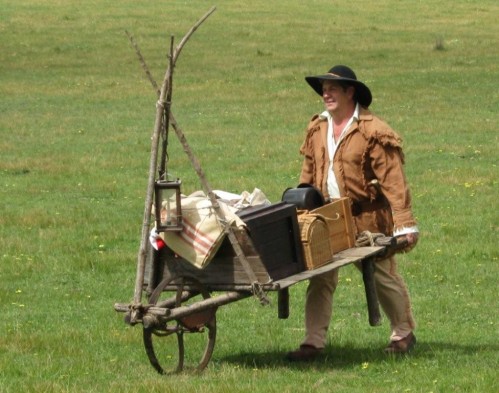 Where you can push your own barrow, light the primitive fire within, and really live your chosen persona. Camp among the truest friends at a truly primitive rendezvous – from Saturday 19th Sept. through to Sunday 27th Sept. Main events Sat/Sun 19th/20th Sept.
Relax and relive the past for a full nine days or just do the weekends.
Lots of challenge shoots planned plus our mountain man hunt. Knife and Hawk competitions; Participants should make every attempt to comply with our “Guidelines” for personal apparel, all shelters, camp cooking, and camp furniture. You should bring at least 20 litres of drinking water in period suitable containers (or covered if necessary). Trade Blanket items should also conform to our Primitive themes.

Note: Our Rendezvous is not an open event, visitors seeking invitation should contact any of our Committee who will provide directions to campsite and other relevant information, and assist with finding suitable loan apparel (if required) for any new chums.